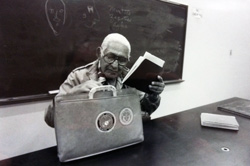 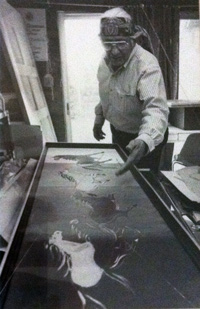 (Hart Hall is currently closed to the public, but will reopen in Fall 2021 quarter.)

Carl Nelson Gorman (1907-1998) was born on the Navajo Reservation, a member of the Khinyá’ áni clan (the Towering House People) . Gorman began his career with his service in the U.S. Marines during WWII as a member of the elite group of Navajo Code Talkers who translated military intelligence into Navajo codes that were never broken.

After the war, Gorman studied art at the Otis Art Institute in Los Angeles and became an accomplished painter, exhibiting his work nationally and internationally and receiving numerous awards in painting. His artistic practice was highly influential for his son, Rudolf Carl Gorman, more commonly known as R.C. Gorman, who later rose to prominence for his own painting and printmaking. Their artistic relationship is evidenced by some of the rare father/son exhibitions that helped launch his career.

Carl Gorman came to UC Davis in 1969 at the invitation of Prof. Jack Forbes to help develop the Native American Studies program. As faculty, Gorman created the Native American art studio workshop. To further his teaching, he established a museum at the Tecumsuh Center, later known as the C.N. Gorman Museum, to perpetuate Native art and to educate students of works by Native artists.

In 1973, he returned to the Navajo Reservation where he worked as Director Native Healing Science at the Navajo Health Authority. Gorman later joined the staff at the Navajo Community College where he lectured about Navajo culture, in his native Navajo language and continued research in Curriculum Development. He passed away on January 29, 1998.

The FLASH! exhibit series is located in the lobby of Hart Hall and is organized by museum students and interns.